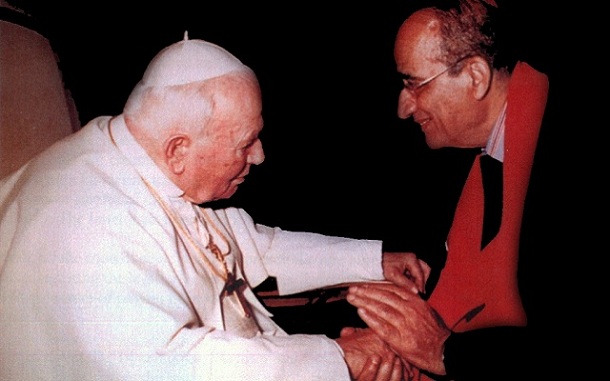 ADIC’s work in bringing together Al-Azhar and the Vatican began in the early 1990s when Dr. Aly El-Samman organized a series of three meetings between the two organizations with the aim of creating an official agreement for dialogue. The meetings took place in Bern, Paris and Cairo, respectively. After the first meeting in April 1994, Dr. El-Samman commented, “Through the grace of God, a positive current passed between Sheikh Gadelhaq Aly Gadelhaq, the Grand Imam of al-Azhar; and Cardinal Franz Koenig, from the Sacred College at the Vatican. In the space of two meetings of three hours each, a real climate of confidence was born.”

Dr. El-Samman then assisted Al-Azhar in creating the Permanent Committee of Al-Azhar for Dialogue with the Monotheistic Religions. Finally, after four years of relationship building and negotiations, an agreement between Al-Azhar and the Vatican was signed on May 28, 1998. This agreement strives to create a spirit of fraternity, solidarity, justice and peace between Christians and Muslims throughout the world.

A notable result of the official agreement was the historic visit of His Holiness Pope John Paul II to Al-Azhar Al-Sharif on February 24, 2000. Dr. El-Samman played a pivotal role in the Pope’s first visit to this 1,000-year old institution - the unequivocal religious and moral authority of the Sunni Muslim world.

The Joint Committee for Dialogue between Al-Azhar and the Vatican continues to meet every year to pursue actions based on the common values of all monotheistic religions.